A woman's dog came in heat and she was concerned about keeping it and the male separated. But she had a large house and she believed that she could keep the two dogs apart.
However, as she was drifting off to sleep, she heard awful howling and moaning sounds.
She rushed downstairs and found the dogs locked together and unable to disengage, as frequently happens when dogs mate.
Unable to separate them, and perplexed as to what to do next, although it was very late at night, she called her vet, who answered in a very grumpy voice.
After she explained the problem to him, the vet said, "Hang up the phone and place it down alongside the dogs.
I will then call you back and the noise of the ringing will make the male lose his erection and he will be able to withdraw.
"Do you think that will work?" she asked.

"Just worked for me." he replied.

A man sees a sign saying 'Talking Dog for Sale'.
Intrigued, he rings the door bell and the owner appears and says the dog is in the back garden.
The man sees a gorgeous Springer Spaniel and says to the dog, "Do you really talk?"
"Yes" says the dog, in perfect English.
After reeling from shock, the mans says "Please, tell me your story".
"Well, I realised I could talk when I was just a puppy so I was soon sold to the SAS. They immediately
were sending me all over the world where I would sit in with spies and world leaders because they never had a clue that i was eavesdropping the whole time.
I was one of their most valuable spies for over eight years"
"Eventually I was getting tired and older so I decided to settle down and lead a less stressful life.
I got a job at Heathrow Airport doing undercover security work. The amount of drug deals I thwarted was ridiculous and I ended up receiving many awards."
" I eventually settled down and got married, even having several puppies of my own, and have now fully retired"
The man, totally amazed, goes back into the house and asks how much the owner wants for the dog.
"Ten quid should do it" the owner says.
"TEN QUID! But your dog is amazing! Why are you selling it so cheaply?"

"Because he's a bloody liar, he's never even been out of the garden!" 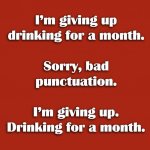 SwingsitlikeHogan said:
Its an advert for balls.
Click to expand...
Thanks for confirming. Are you sure?

sunshine said:
Thanks for confirming. Are you sure?
Click to expand...
Quite sure.

Slime said:
View attachment 43775
Click to expand...
Reminds me of the true story about a work colleague .
One day our boss was 'ticking on' and shaking his head.
We were on early shift and, seeing this , I asked him what was up?
He told me that Bill, who was habitually late, had come up with his latest excuse. Which was..
He was dreaming he was flying this plane and was trying to land, but the airport was foggy and so he had to do another circuit before he could land.
So he was late waking up, and thus was late!😳