Dando said:
View attachment 39684
Click to expand...
Needs a furry mouse on a string and then watch then go

A photographer friend of mine was killed when a huge lump of chedder fell on him.


To be fair, the people being photographed did appear to try and warn him.

Slime said:
A photographer friend of mine was killed when a huge lump of chedder fell on him.


To be fair, the people being photographed did appear to try and warn him.
Click to expand...
That one took me a while

AmandaJR said:
That one took me a while
Click to expand...
Three readings for me to get it.

Joe was a successful lawyer, but as he got older he was increasingly hampered by incredible headaches. When his
career and love life started to suffer, he sought medical help. After being referred from one specialist to another,
he finally came across an old country doctor who solved the problem.

"The good news is I can cure your headaches... The bad news is that it will require castration. You have a very
rare condition which causes your testicles to press up against the base of your spine and the pressure creates one
hell of a headache. The only way to relieve the pressure is to remove the testicles."

Joe was shocked and depressed. He wondered if he has anything to live for. He couldn't concentrate long enough
to answer, but decided he had no choice but to go under the knife.

When he left the hospital he was without a headache for the first time in 20 years, but he felt like he was missing
an important part of himself.

As he walked down the street, he realized that he felt like a different person. He could make a new beginning and
live a new life. He saw a men's clothing store and thought, "That's what I need-a new suit."

I'm not saying people in my area have bad teeth, but one woman just smiled in Tesco and the barcode scanner picked it up as a set of saucepans.

Some crackers in Billy Connoly's ,in his own words, just now on channel 5.
Some stories I've never heard before , tears in my eyes laughing , even at the stories I have already heard
C 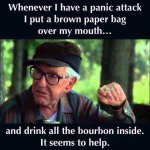