Does anyone want my old copies of Chiropractor Monthly?

I’ve got loads of back issues.

A driver was stuck in a traffic jam on the M25. Nothing was moving.

Suddenly, a man knocks on the window.

The driver rolls down the window and asks, "What's going on?"

"Terrorists have kidnapped all of our MPs during a sitting of parliament, and they're asking for a £100 million ransom. Otherwise, they are going to douse them all in petrol and set them on fire. We are going from car to car collecting donations."

"How much is everyone giving, on average?" the driver asks.

The man replies, "Oh, about a gallon."

My nan just called and said she hates her stairlift.
it’s driving her up the wall

My wife is furious that our young neighbour next door has started gardening nude.

Personally, I’m on the fence.

I had to go to the doctors to get a steering wheel removed from my pants, it was driving me nuts


My next poo could spell disaster!
R

His arrival was foretold by our ancestors in ancient rock paintings.

Police released me, let me go. 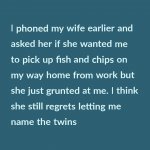 My mate advised me to put a tenner on a horse called 'Landfill'.

It turned out to be a rubbish tip.